6 Days tour from Fez to Marrakech via the Sahara Desert

6 Days tour from Fez to Marrakech via the Sahara Desert

When you finish having your breakfast at the Riad, you will be discovering the historical city- Fez. For over 350 years, Fes was the capital city of Morocco. It is famous for having interesting monuments. You will visit the Royal Palace which can be seen as an astonishing example of modern restoration.

Continuing to explore fez, University Al Karouine will be next. To the record, this university is the first established university in the world according to Guinness record, UNESCO and many other scholars.

The Zaouia of Moulay Idriss II  (where the Moulay Idriss II ‘s tomb exist), Nejjarine Fondouk, and Tanneries, (were built in 17th century and one of Fez’s fascinating insights) will be also visited.

After having lunch, we will go to visit the famous Nejjarine fountain, and the Batha Museum (which had been a palace before it became a museum in 1916). Next, the astonishing panoramic will be a great view to see. You can see the entire Medina ( city) of  Fez from there. Finally, you will return to enjoy spending the night at the hotel.

The tour will be resumed after having a Moroccan breakfast at your accommodation.

Traveling to Merzouga will be through many places like the region of Imouzzer that is surrounded by Cedar Forests. In this place, you will be able to see trees climbed by the Berber apes and different kinds of birds. the middle Atlas Mountains where you can tents in the slopes, herds of goats owned by nomadic Berbers. Having lunch will be at a local restaurant in Midelt. The tour will continue towards Oued Ziz ( A river that comes from the High Atlas mountains in Morocco and flows into Algeria’s the Sahara Desert). Before we reach Merzouga (where you will spend the night), you will also travel through Errachidia city.

In day number three, the direction will be Erg Chebbi. You will be able to visit a Berber house, enjoy listening to some Gnawa music (has a rich repertory ancient African Islamic spiritual religious songs. It combines ritual poetry and traditional music). Berber nomads will be pleased to have (serving the well known Saharan mint tea) while you are exploring the area. lunch will be back in Merzouga. After taking a short while to rest, camels will be ready to ride in the sand dunes. After watching the fascinating sunset from high dunes. You will enjoy the night in tent in the middle of the Sahara desert while you are listening to berber music, and gazing at endless stars in the sky.

On this day, you ou will get up early to enjoy the sunrise in the Sahara desert. Being able to have a nice breakfast and shower will be Back in Merzouga.

The trip will be continued to visit Ouarzazate. In your journey, you will walk through the interesting Berber where you may love to buy something as a souvenir or as a present. At a hotel in Ouarzazate, you will spend the night.

On the fifth day, you will the hotel after having breakfast.  The destination this time will be Marrakech, but you will be able to visit the Kasbah of Ait Ben Haddou (where you will have lunch) in your journey. Kasbah of Ait Ben Haddou a UNESCO World Heritage Site. It was built in the 11th century. Many movies were shot in this historical monument such as Gladiator. The trip will be resumed to traveling through Tizi-n- Tichka. By the evening, you will in Marrakech at your accommodation.

A local guide will be your company in Marrakech. The plan will be making you able to see the beauty of Marrakech and some of its interesting monuments:

-The Koutoubia mosque ( One of the largest mosques in Morocco).

-Bahia Palace is a 19th-century monument It is a palace with a set of gardens. It was built to be the greatest palace of its epoch.

-You will also visit the famous Souks where you may want to have something as a memory or as a present for someone special.

-walking for a short while exploring the Medina valleys and looking up to the crafts of the skillful artisans.

– Jamaa El Fna where you will enjoy Moroccan mint tea or a cup of coffee at a restaurant or a cafe with a beautiful panoramic view of Jemaa el Fnaa square. It is a large square place in Marrakesh’ medina. It is also a market in which you can find many interesting products and a variety of delicious local meals. Local people and tourists share this place for entertainment. They can, for example, enjoy watching Gnoua dancers listen to the storytellers, pass by water sellers.

Dinner will be at the hotel. 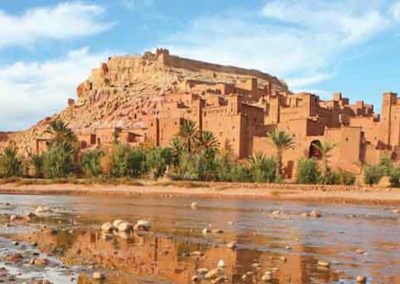 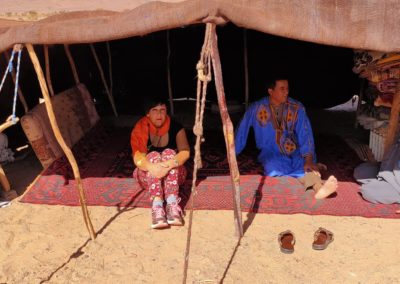 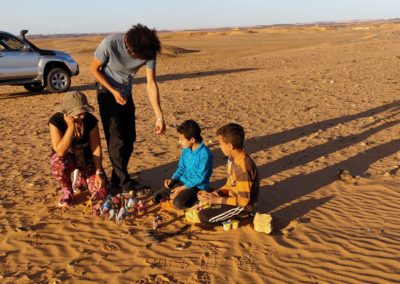