8 Days tour from Fez to the Sahara Desert via Marrakech

8 Days tour from Fez to the Sahara Desert via Marrakech

DAY 1 : FEZ – AIRPORT PICK UP TRANSFER TO THE HOTEL

At the airport of Fez Saiss, we will be waiting for you to pick you and drive to your accommodation at the Riad/hotel. If you had enough time, you will enjoy a short visit to the Medina of Fez as a first contact with the city. Dinner will be guaranteed at the hotel/Riad.

The second day will be planed to explore Fez more. This ancient city has many several monuments that deserve to be visited:

⦁ Visiting Fez’s souks and walking through the small alleyways that are over nine thousand will make you able to enjoy Fez’s handicrafts, the wonderful mosaics, hear tales, and pottery making.

⦁ Mosque or university Al Karaouine. It was the first established university in the world according to Guinness record, UNESCO and many other scholars.

⦁ The Aattarine Madrassa which was built in 1323 by Sultan Uthman 2 Abu Said. It derives its name from Souk El Attarain (a market of perfume and spices).

Dinner and accommodation will be at the hotel.

You will leave Fez, after having breakfast, heading to Merzouga. Crossing The Middle and High Atlas, you will travel through Ziz Valley. It is known of the palm groves and the variety of crops. Ziz Valley is considered an Alouite dynasty which still rules Morocco. At the foot of dunes of Merzouga (By the evening), you will be at the hotel.

In the early morning, you’ll enjoy the sunrise over the magic dunes. To explore the Sahara desert more, you will be taken by 4×4  to visit Dayet Sarij. It was originally a salt lake. It is known by different kinds of birds such as flamingos.  We will also be welcomed at one of the Gnawa people’s houses. Gnawa music is a well-known style of music with a plentiful repertory of ancient songs and rhythms. During your visit, you will be able to observe their lifestyle, listen to their music and watch them dancing.

Discovering the Sahara desert, you will cross the path of Rally Paris-Dakar. We will also visit one of the families who will be pleased to have you serving a Saharan Moroccan tea.

Towards the hotel, we will be driving after spending an amazing time.

In the afternoon, you will ride camels heading to the heart of Sahara. Over the dunes Erg Chebbi, you will witness the beautiful sunset.

You will spend the night in tent in Erg Chebbi (where you will have dinner). Erg Chebbi is a vast sea of dunes constructed by wind-blown sand.

In the early morning, you will wake up to enjoy the sunrise in Erg Chebbi. The next thing you will do is going back to Merzouga. At the hotel, you will have breakfast.

Taking a short while to rest will be followed by resuming the tour Rissani.  It is a town in Errachidia province.  In Rissani, visiting the Souks will be an amazing experience.

In the Souks (traditional markets), you will observe clothing, furniture, dishes, local food, etc. Local people come to the souk to buy whatever they need. It is a very good place to observe for it is dynamic and full of life.

Traveling through Erfoud, Tinjdad and other small interesting villages, we will reach Todgha Gorges (Where you will have dinner at the hotel).

Todgha Gorges are what we will be exploring next after breakfast.  Todgha gorges are a series of limestone river canyons. Most visitors enjoy hiking and passing by the nomad who comes down to the gorge to get water. After lunch in the highest, narrowest gorges in Morocco ( Todgha gorges).

We will also visit Ouzoud waterfalls that flow into the El-Abid River gorge. Many tourists visit this place for its popularity. It is located near the Middle Atlas, 150 km northeast of Marrakech. Ouzoud waterfalls are 100 m high.

At the riad or Kasbah, your accommodation will be.

After visiting Ouzoud Waterfalls and having breakfast, we will head to Fez city. In our journey, we will travel through the Middle Atlas which, is part of the range the Atlas Mountains, and Khenifra. Khenifra city (located in the North’s center of Morocco) is surrounded by Atlas.

Dinner will be served at the Riad/hotel in Fez.

DAY 8: FEZ – TRANSFER TO THE AIRPORT OF FEZ AND END OF THE TRIP

Towards the hotel, we will drive you after breakfast (at the end of our services). 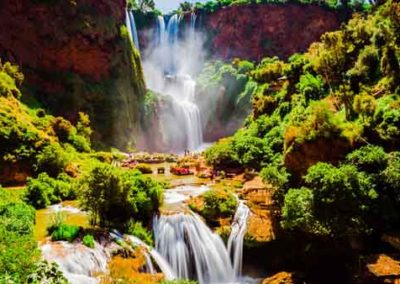 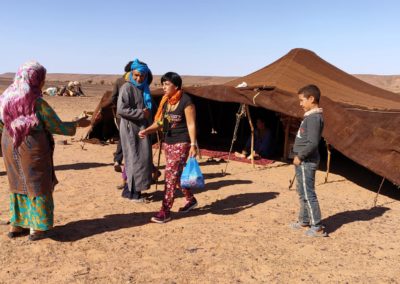 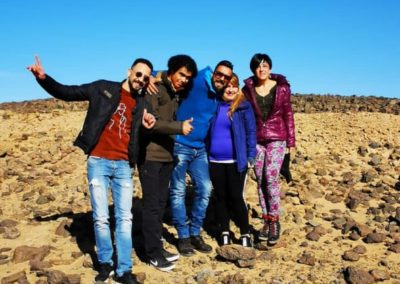 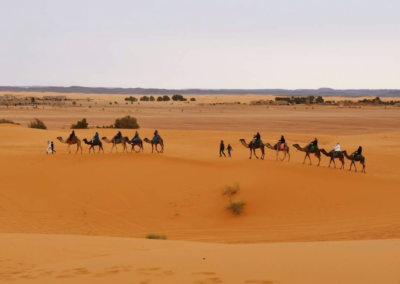