DAY 1 :From CASABLANCA TO RABAT

A driver and a professional tourist guide will be waiting for you at the international airport Mohamed 5th Casablanca. In the following step, you will be taken to visit one of the famous mosques in Africa and the world in general. Masjid ( mosque) Hassan 2 which holds the name of the Moroccan king  Hassan 2 ( 1929- 1999) who started ruling in 1969 until he died in 1999.  This mosque, which took 6 years to be built ( 1987_1993) is considered the largest mosque in Africa and the third in the world. It has the capacity to contain  25.000 worshippers covering 24,000 square. Besides being a place of praying, a culture center with a library, museum and a Koranic school are parts of the giant building, too. It will be fascinating to see such work in which the amazing handicraft is clear.

The current capital city of Morocco, Rabat,  will be Your next direction. The first thing you will do there is visiting the Royal Gates which remain since 1864. Enjoy the beautiful garden of Challa will be included on the trip. Chella exists in the metro area of Rabat. It is a medieval fortified Muslim necropolis which was one of the Romanian colonies once. Chella or Shalla is encircled by walls were built with the intention of defense and protection.

When we finish visiting The Mohammed VI Museum (a contemporary and modern art museum and one the important museums created by the National Foundation of Museums of Morocco),  we will travel to see the Mausoleum of Mohammed V. It is composed of the Moroccan king’s, Mohammed V,  tombs and his two sons ( The previous king Hassan II and Prince Abdallah). Hassan II tower is the place that will be visited next. Hassan Tower is a 12th-century still-standing monument. The intention was building the largest minaret along with the mosque in the world but, unfortunately, it was left as an incomplete Masjid (mosque) when Yaqub Al Mansour died in 1199. He was the founder of Hassan tower.

Oauday Kasbah which is was used as a military base will be also visited. Amorabits built it in the 12th century to defend their lands from Spain. It is one of the unique features in Morocco.  while you are in Oauday Kasbah, you can enjoy the charming scenic views of the Bou Regreg river, the Plage of Rabat, and the Atlantic Ocean.

No worries about breakfast and dinner! They will be included.

Meknes city, one of the Imperial cities of Morocco, will be next to your next direction after having breakfast. In Meknes, the first place you will visit is Sahrige Swani. Sultan Moulay Ismail built to supply the army, homes, mosques of the town with water. We will also go to see the Moulay Ismail mausoleum. Through the famous gate Bab Mansour, you can move into the Medina. The iconic Bab Mansour was built in 1732 known for its marble columns and geometric ornamentation. Traveling through Lahdim Square ( Saht Lahdim), where people used to gather to discuss the political, cultural and religious issues, we will head to Volubilis. This interesting and ancient site had been once the capital of the kingdom of Mauretania before it became the southernmost city of the Roman Empire. Volubilis is the prominent ruins of the Roman in  Morocco. The fasciating mosaics give a unique decoration to the city. Visiting Volubilis makes you go back centuries. The day will end at the hotel where you will have breakfast and dinner.

your third day will be programmed to travel to Fez city to visit the Royale palace gate which contains seven gates  (before that you will have breakfast first). the Royale palace is considered an astonishing model of modern restoration. while you are there, you will be able to enjoy the breathtaking view of the Medina from the southern tower. Before we go to explore the old Medina on foot through the small alleyways that are over nine thousand, you will enjoy Fez’s handicrafts, the wonderful mosaics, hear tales, and pottery making. The next place we will be Al Madrassa Al Boaananiya. It was founded by the Sultan Faris Abu Inan in 1351. It was mainly used to teach the Quran. Belly dancing, local music, and a delicious will be what you will enjoy as a perfect ending of the day.

On the fourth day, Marrakech will be the next city we visit. The long journey to get there well worth the travel. In our way, we will go through the Middle Atlas mountains and Azrou which is famous for the Cèdre Gouraud Forest. It is a woodland area in the Middle Atlas Mountain. It was named for the French general Henri Gouraud. Cèdre Gouraud Forest exists between Azrou and Ifrane. In this place, you will be able to see trees climbed by the Berber apes. In  Cedre Forest, you will rest for a short while. Then, we will continue the trip to the Red city Marrakech. When you arrive Jemaa el Fnaa which is a square place in Marrakesh’s medina. It is also a market in which you can find many interesting products and a variety of delicious local meals. Local people and tourists share this place for entertainment. They can enjoy watching Gnoua dancers listen to the storytellers, pass by water sellers.

A local guide will be your company at 9:00 a.m. The plan will be making you able to see the beauty of Marrakech city. You will be also guided to have an idea about the interesting monuments of the city. Bahia Palace is the first one you will visit. It is a 19th-century monument. Later on, you will head to the Saadian tombs which return to the 17th century. School Ben Youssef, which remained for four centuries as a home for students who had the will to learn different sciences such as theology, will be also visited. It consisted of 132 rooms for non-Marrakesh students and could accommodate up to 900 students, and the Koutoubia mosque ( One of the largest mosques in Morocco) will be the next places. Both of them were built in the 12th century. You will also visit the famous Souks where you may want to have something as a memory or as a present for someone special. You will have even enough time to enjoy a Moroccan mint tea or a cup of coffee at a restaurant or a cafe with a beautiful panoramic view of Jemaa el Fnaa square.

The sixth day is a free day in which you will be able to visit the Gueliz, which is a new city. You may also want to treat yourself with a Hamam and spa. Visiting Majorelle Gardens gardens (created by the french artist in 1923) and Menara gardens, which was was built 12th century by the Almohad Caliphate ruler Abd al-Mu’ min, are one of the activities that you can do in this day.

Morocco Berber Travel will be very thankful for your trust. We will be very pleased to drive to The international airport Mohamed 5 wishing a safe flight to your home. 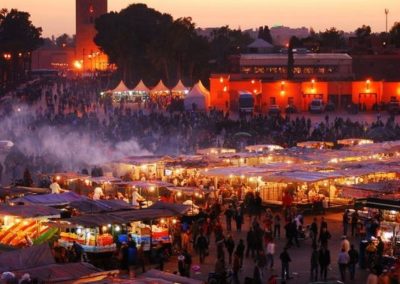 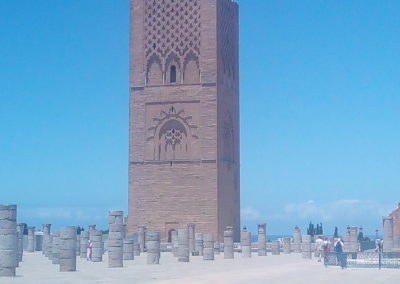 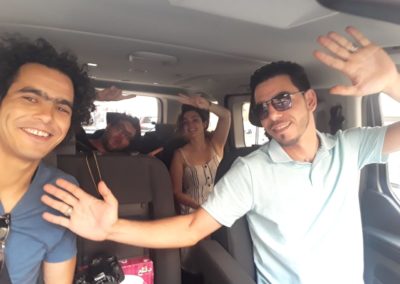